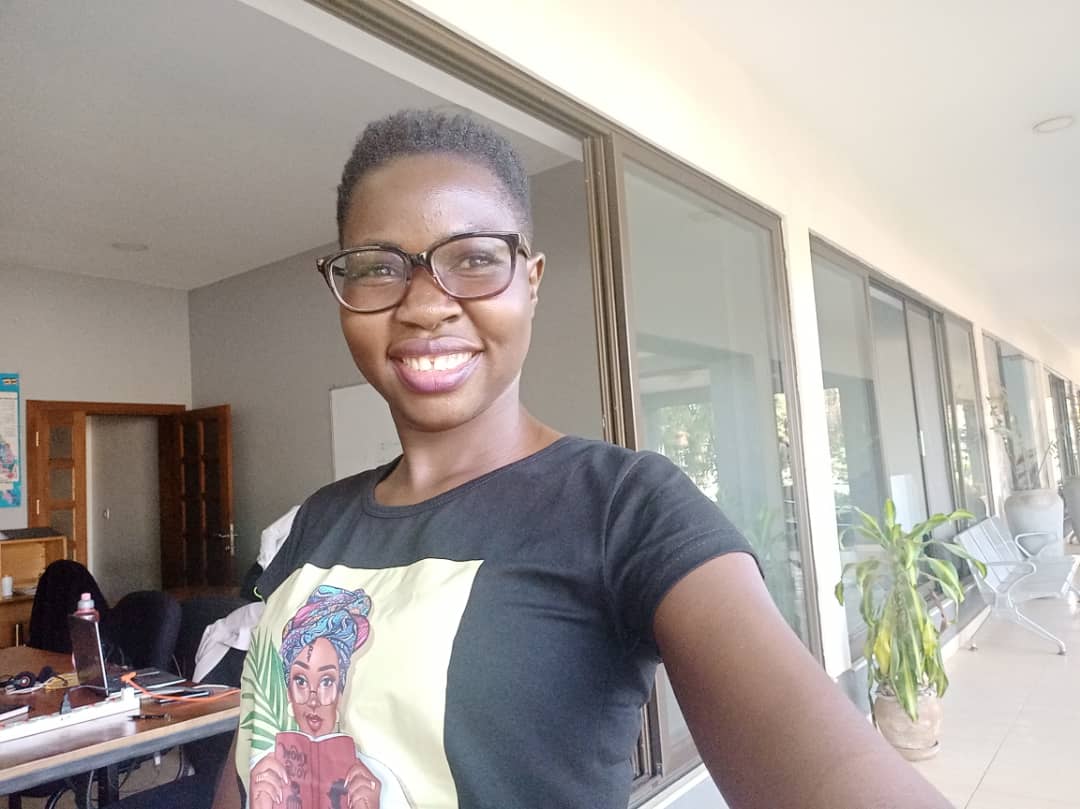 Community connection has always been important to Caroline Kyimiza—that is true both before and after the COVID-19 pandemic began.

The young Ugandan innovator is the founder of Cari Innovation Limited, a social enterprise and empowerment centre that mentors women and youth to create solutions to the sustainable development goals. Caroline started the initiative in 2018 during an Impactathon organized by the Youth Equality Centre (a social enterprise created by #DOTYouth Ali Kaviri).

Caroline is from Gulu, a city about 350 kilometres north of Kampala, Uganda’s capital. The eldest daughter of 11, Caroline learned early on about supporting other young people—her parents were killed when rebels from the Lord’s Resistance Army overtook northern Uganda. Caroline became the primary breadwinner at a young age.

Raising her siblings and supporting them through school, Caroline received a scholarship and earned her bachelor’s degree in social work administration. Completing a post-grad diploma, she returned to Gulu to help other young people pursue their ideas and passions—just as she pursued her own.

““I knew I could not take every girl or boy to school, but DOT taught me that I can create opportunity within anything I can reach,” Caroline says. “Many young people have not gone to school, but they are gifted in one way or another.”

Since 2018, Caroline and a team of eight have reached 100 youth directly, many of whom have returned to their communities to create their own initiatives.

Caroline was in Gulu when the first cases of COVID-19 were reported in Uganda. “We were in a total lockdown and people were not ready,” she recalls.

Though the lockdown was important to slow the spread of the virus, it also meant people were not able to work or visit their farms to harvest food. Markets and shops were closed, public transportation halted, and government soldiers patrolled the streets.

“People ate everything they had at home. We were seeing others die because of not having anything to eat,” says Caroline.

Adapting her social enterprise in response to this urgent situation, Caroline created a WhatsApp group to collect surplus food that community members could spare. Donations came from individuals and the district government and the team soon had a stock pile of beans, oil, and maize.

Through Cari Innovation, Caroline already had a network of volunteers across northern Uganda. These volunteers helped identify the most vulnerable families who then received a delivery of emergency food staples. The initiative has reached 1,000 households since April.

Food shortages were not the only challenge faced by Caroline and her community during the lockdown.

Like the rest of the world, Uganda was scrambling to share fast-changing information with its citizens. Government health guidelines were primarily being shared in English, and there was a language barrier for people living in Gulu and other northern districts.

Caroline and her team took further action. They translated the official health messages into local languages and broadcast them twice weekly through a radio talk show. Broadcasts were combined with door-to-door sensitization visits to villages in the surrounding Gulu, Lira, Pader, and Arua districts. Not to be deterred by the suspension of public transportation, Caroline and her team reached these locations by bicycle.

“Through our help of translating the messages, the information was perfectly taken by our community,” Caroline says. “If we had not done that I am sure some would not have known about the signs or symptoms of COVID-19.” If not for the outreach efforts of Caroline and her team, villages would not have been reached by the Ugandan government until August.

Caroline joined the #DOTYouth Street Team in April. Being part of this Mastercard Foundation and Government of Canada-supported initiative offered her the chance to connect with fellow young leaders and learning opportunities across the DOT network.

One notable connection was with Latifa, another #DOTYouth Street Team member and founder of PsychBeing, a Kenyan social enterprise that uses technology to connect people with essential mental health services.

“Our people went through trauma during the war, and when COVID-19 came people were again traumatized,” Caroline says. “Latifa helped me take our COVID sensitization and add mental health messaging.”

In turn, Caroline supported Isaac, a #DOTYouth Street Team member in Rwanda, in writing a proposal for his COVID-19 initiative. Through the Street Team calls she also met Olivier, a fellow Ugandan who runs the Refugee Innovation Centre in the Rwamwanja Refugee Settlement in the country’s southwest. Despite having never met in-person, the two young leaders are now working together on a new project that will benefit their communities where youth have known conflict—but also have brilliant ideas to share.

It will likely be awhile before Caroline and Cari Innovation are able to return to their pre-pandemic activities. Caroline admits the lockdown has greatly affected her social enterprise—the team is unable to run programming while working from home, and finding funds to continue the initiative is an ongoing struggle.

Through the #DOTYouth Street Team, Caroline has been meeting with a coach from Coach Africa. These conversations have helped her to define the personal and project goals that will help Cari Innovation continue through this difficult time.

As with the rest of her initiative, Caroline does not plan to keep these #DOTYouth Street Team lessons all for herself:

““Everything I have learned I am going to teach and train to other youth such that they can move on the same road of development.”

Like the other #DOTYouth Street Team members, Caroline is proof that young social innovators do not stop during a pandemic—they adapt and lead with the same sense of determination and courage.

Are you a youth leader, changemarker or social entrepreneur that is supporting your community to respond to COVID-19 challenges?